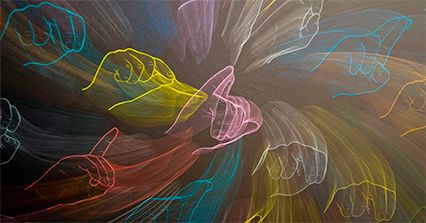 Technology changes the way we interact as humans, the way we conduct business, and more. It’s also doing quite a lot for those who aren’t as fortunate to have all their senses, like the deaf. One of the areas that technology is helping quite a bit in is communication. The digital age is making it easier for people to communicate, no matter what corner of the world they are in, but it’s also making it easier to conduct face to face meetings, regardless if your eyesight is 20/20 and you have perfect hearing, or not so much. In fact, if you’re part of the second category, you may find yourself in some confusing situations where you can’t follow what your colleagues are saying. Or you attend meetings that soon turn into a nightmare because everyone talks at the same time or they’re talking faster than you can follow. Many people who are partially or completely deaf express themselves with the help of sign language, mixing it up with lipreading. Technology, however, is making things easier nowadays.

A couple of students invented, a few years ago, a pair of gloves that could translate American Sign Language to speech or text. While they told us that they are no longer working on that project, it doesn’t mean that it’s not something that could get picked up again in the future. It’s certainly a project that’s interesting enough that it could attract some funding in the future. Called SignAloud, the gloves are equipped with embedded sensors that monitor the position and movement of the user’s hands. The information is transmitted to a computer via Bluetooth, which then analyses the data and checks the library for a gesture that corresponds. Once the gesture is identified, the system speaks the appropriate sound or generates the text. Often times, people who use the ASL to communicate are not understood by those they are trying to talk to, whether we’re talking about a simple effort to go shopping, or more, in business meetings, for instance. Making it easier for others to understand what they’re signing would be of great help. The language barriers they face makes for a rather discriminatory environment. Oftentimes, people that cannot hear aren’t even invited to business meetings because of the extra burden of bringing in the necessary translation. If they cannot make themselves understood, they are closed out of so many meeting places, or even school. This gives birth to a lot of frustration within people that are in this situation, especially since they all have so much to share, their thoughts and insights, and the inner richness of their world.

Perhaps due to the frustrations that a lack of proper communication and, often, a lack of interest expressed by employers to make things work, there’s a growing number of small businesses among deaf people. They’re not only trying to make it work on their own, but they’re also working to improve awareness regarding the deaf and how others should react when interacting with a person with such a disability. There are numerous such awareness programs across the world, mostly funded by the governments and by NGOs. The fact that a growing number of deaf people is starting businesses can only have a positive impact on the economy. The truth is, however, that most of the profoundly deaf live on benefits simply because they cannot find a job they can do under the circumstances, and they can’t find companies that are willing to take the extra steps to accommodate their needs. Plus, starting a business can be quite costly, and many don’t have the necessary funds. It’s a complicated matter that could be made better by both those in the private sector and those in the government. Sure, the world’s governments can’t exactly invest in the creation of technology that can help the deaf, but they can help carry some of the burden of the cost that could make these people’s lives easier in the long run. This applies to any kind of disability. A person who is given all the tools to make it work in life, to feel useful to society, to make a living on their own will (almost) always choose this. As for the private sector, they just have to figure out that it’s not always the profit that matters in such situations; that it’s not just the money that makes it worth it. Creations like SignAloud and many others like it can benefit millions of people. Those with disabilities are certainly a minority, but that doesn’t mean that creating devices and technology that can help them isn’t important. In fact, it is perhaps much more important than creating just another app or gadget that competes with dozens of others just like it and which are directed at folks without any disability. Making a difference for someone who’s had difficulties their entire lives is more rewarding.